The Time-Limited Leader Makes the Raid a Success 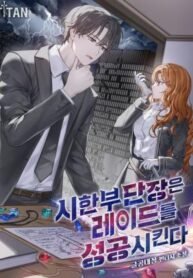 I can be the main character even though I’m not a hunter. Kang Moo-hyuk succeeds in all the raids with his genius brain and rises to the position of strategic team leader despite not being a hunter. But one day, he is diagnosed with a disease called “mana addiction” and gets involved in a power struggle within the guild. With only a few days left to live, he decides to do everything he wants to do before he dies and burn himself. The guild he chose as the final place to burn his will was the number one guild in the rankings, “Taesung Guild” which had ranker Joo Se Ah, but, how could Kang Moo Hyuk raise his guild full of amateurs?

NOTE: THIS IS AN MTL TRANSLATION

Margrave’s Bastard Son was The Emperor

Chapter 18 August 14, 2022
Chapter 17 August 14, 2022
Here for more Popular Manga
We use cookies on our website to give you the most relevant experience by remembering your preferences and repeat visits. By clicking “Accept All”, you consent to the use of ALL the cookies. However, you may visit "Cookie Settings" to provide a controlled consent.
Cookie SettingsAccept All
Manage consent